Damian Sommer made A friendship ​​in four colors in 2011 for TOJam 6. The game is ostensibly designed for two players, but I didn’t have anyone at hand back when I found it. I beat the early stages controlling one character with my left hand and the other with the right, and it started to grow on me.

Luckily it’s not a competitive game. Both characters depend on each other to reach the same goal. Levels only end when both characters arrive safely to the finish line, and the death of either sends you back to the starting point.

There was no conceptual problem, no enmity between my hands. But I’m not ambidextrous. It got difficult and eventually I had to stop. At any given moment I have two hands, but only the one attention.

In cases like these I tend to leave the game be until my next visit to my sister’s house. And no exception this time, on my next visit we were beating the levels I’d left hanging.

It hit me that, had I been able to beat it alone, I would’ve had the satisfaction of solving its puzzles but I would’ve missed the game’s humor, the complicity of clumsiness it promotes.

And I get the feeling its levels were built with all this in mind.

Had the game allowed me to finish it alone, the experience would’ve been incomplete and without my knowing it. Had it required a second player from the start, I wouldn’t have played enough to realize it was something worth bookmarking for further collaborative rereading.

Just as a demo wants you to fall in love with the game, but at some point refuses to go on till you buy the full product, A friendship in four colors stops too, in a way, until you get yourself a partner in arms. 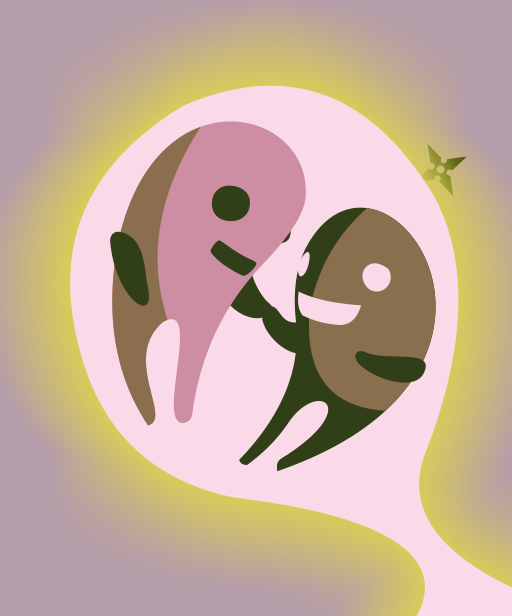 It’s common for a videogame to give us more powers and more weapons with the passing of the levels. Killing stuff becomes increasingly easy, and to balance things out enemies become more numerous or powerful or resilient.

A friendship in four colors does something similar, and it does exactly the opposite.

Each new level gives one or both characters a special skill that will last them the rest of the game. Nearly all of them are weapons, and they make it so killing your partner gets easier and easier.

The interesting part: there’s no shooting button, each weapon has not only a particular way of inflicting harm but also a particular action that’ll set it off. This weapon shoots when you jump, this one when you run, this other one shoots once every second. Since success depends on the survival of everyone involved, your character’s murderous capacities quickly become a problem.

In the third level, a character scatters bullets every time she jumps. She tries to jump as far from the other as possible, and when that fails, the other does his best to dodge.

In the fourth level, the character who dodged now has a “back laser” that shoots every moment he’s on the move. And weapons, remember, are cumulative, so the character with the bullets has to be doubly careful not to jump near the other because if the other’s taking the lead he’ll have no way to dodge without unleashing an infernal ray in her direction.

And the platforms’ disposition, of course, makes sure that each character’s path to the goal puts the other in the greatest possible danger.

The game’s Itch.io page says the work was tentatively titled Testing the strength of your friendship through the use of game mechanics.

A superficial (and valid) reading of this description could be: only true friends can play this game without having their friendship perish due to the number of times the incompetence of one causes the failure of the other. It’s a particularly positive take on the oft-repeated idea that some games (generally competitive) or game elements are friendship-ruining (the internet probably houses more than a handful of listicles to that effect).

But in a different, perhaps warmer sense, it’s possible that A friendship in four colors is literally about friendship put to the test. The rules quite effectively represent the concrete problem of inhabiting this world, and inhabiting it while moving, without hurting the people around us.

In the ninth level, the last one, I’m shooting a deadly laser backwards when I jump and forward when I walk. My sister’s gonna have to stay on top of the map till the end no matter what.

The game informs me I’m in possession of something called “INCINERATOR.” My double jump generates a huge explosion, a ball of smoke taking up a quarter of the screen, and my sister has to avoid it at all costs.

Every so often now, she leaves floating mines along her path which kill me at the slightest touch. And while she scatters her bullets with every jump and I’m assailed by the shuriken rain springing involuntarily from her body, it occurs to me that if I stayed perfectly still I would have no way of hurting her. But neither could we find out how it all ends.

The only way to get to the finish line together and find out what lies on the other side is to keep running and jumping, deliberately opening spaces of vulnerability between us, knowing that the point of the run lies not in the safety of inaction, but in traveling with the person who, having three daggers pointing east, west and north, manages to always have you to her south.