For those of you who are new here, hi, my name is David, I’m the creator of Onda verde—a videogame that came out last month—and I wanted to tell you a little about the experience of making and releasing it.

The game has two main features of interest: 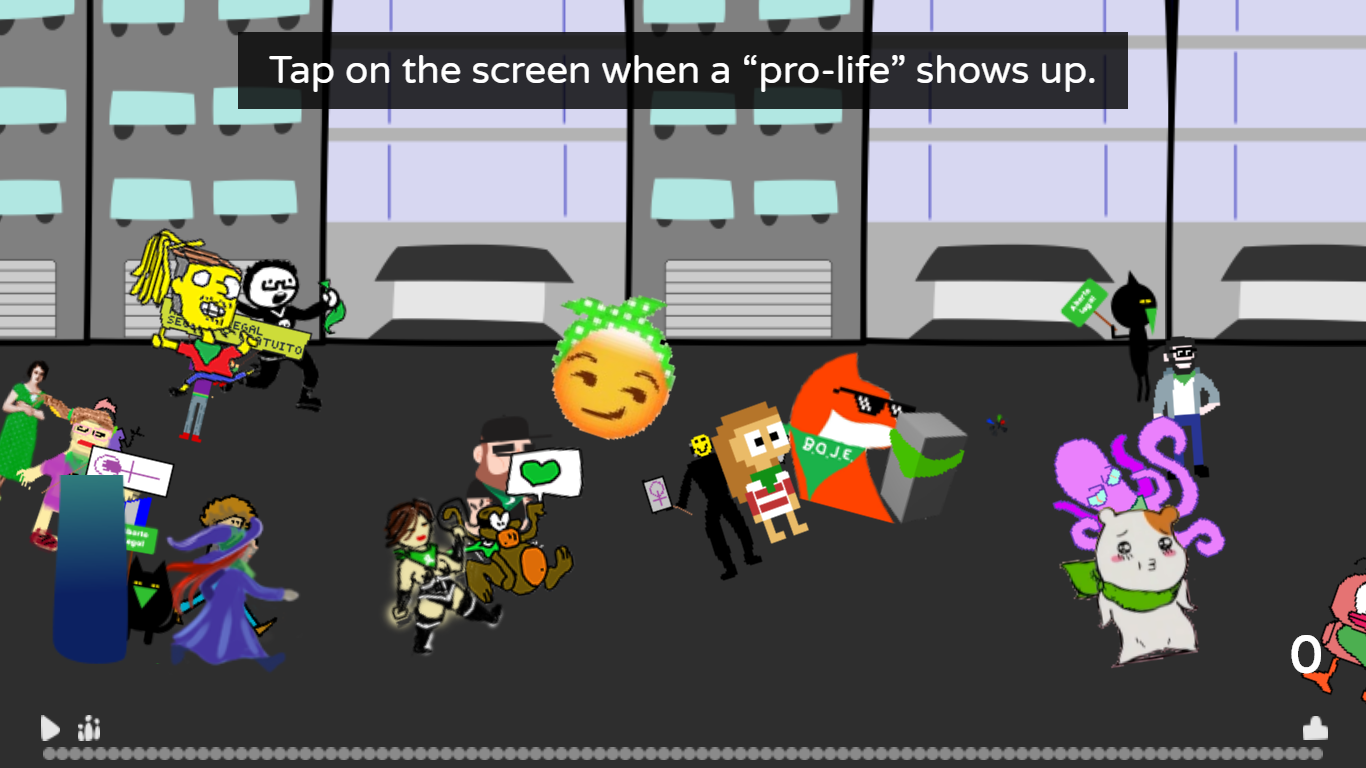 Like any project that’s worth completing, Onda verde began with the desire and inspiration of its progenitors (in this case, me). Especially, with my admiration for games that are experimental, short, funny, joyous, musical and/or involved with their political and cultural context, and my eagerness to apply those principles to my own work (which I’ve generally been doing, but Onda verde is a clearer example).

The most direct inspirations I can pinpoint are:

Come July, Kotaku interviewed Rumpel for a piece on Doom Fetito, and the Argentine Senate vote for the Law of Voluntary Interruption of Pregnancy was looming closer (sadly, the law didn’t pass in the end), and I was increasingly interested in making something, probably a game, that would support the cause in some way.

Fun fact: I am my mother’s only child, but I was born from her third pregnancy. Nobody from her generation in our family had children past the second one. If she hadn’t had an abortion, I wouldn’t have been born.

I more or less came up with the finished idea for the game on Thursday, July 19th, close to midnight. Here goes a fragment of the ensuing conversation (originally in Spanish, of course):

DAVID: I have an idea that depends on (1) me getting it done, (2) you not thinking I’m exploiting a serious subject.

DAVID: I put together a small game in Construct with a bunch of characters in the coming pro-choice march. We ask for people to submit their pro-choice avatars.

RUMPEL: And what happens then?

DAVID: We release the complete game with all the little characters marching. Better yet if it’s a 5 minutes experience with some goal. I’m thinking something like Molleindustria’s virtual march, or maybe Party Bueno.

RUMPEL: I think we might get a lot of dicks, but the idea is good, because there are people who can’t go to the march, and marching virtually might help them.

DAVID: We can organize vetting characters however you like. I can vet the dicks and you check out the remaining ones.

RUMPEL: But I want Yiyo’s opinion.

YIYO: OK it sounded a lot like I wanna see dicks.

RUMPEL: This is such a good conversation.

I had a lot of trouble sleeping that night. It always happens when I’m excited about an idea and I already know how to start making it come true, but I can’t start working on it  immediately because of my schedule. One or two days later; I had put together a playable prototype. Here are some GIFs showing what the process looked like:

I didn’t have a good idea of  what I was supposed to do in the sound/music department, though I suspected Vicu Villanueva had to have made at least one song that was appropriate for the project. For the first few days, the game played to the tune of a sped-up version of The International in Russian.

Luckily, Rumpel remembered Mi gata quiere abortar (“My cat wants to have an abortion”) by Dúo Microcentro (of which Vicu Villanueva is a member). I sent the Dúo an email and they were kind enough to let me use the song.

I had recently watched Game Developer’s Toolkit’s video on game accessibility for people with hearing disability, which I loved and was in sync with what we tend to think about games and accessibility here at Matajuegos.

So, I decided to implement subtitles for the song, which was surprisingly easy and led to one of my favorite moments in the game, where I alter the subtitle presentation to emphasize the lyrics (play the thing if you want to know what I’m talking about, it’s 3 minutes for pete’s sake).

I’m not sure that releasing the game on the same day as the Senate vote was the best idea. Pablo, from Matajuegos too, said in lucid retrospect that it might’ve been better to release it the day before, when folks weren’t so distracted and setting out to take to the streets.

Wrong or not, I had my reasons for releasing on August 8th, but I didn’t know how many days before that I wanted to announce the game and start asking for submissions. Just to copy Party Bueno, I decided 10 days of anticipation was the way to go.

I started up OpenShot (wisely suggested by Rumpel) and began organizing the basic data I wanted to convey in a video that would work as a trailer, an announcement, and a call for submissions all at once. As per videogame tradition, it was all going to be squished together in something like 90 seconds.

On Sunday, July 29th, exactly one day before posting the video, we got together at Rumpel’s to record the voices I needed.

Right from the beginning I planned to have two versions of the video, one in English and another one in Spanish, to appeal to people in every possible corner of the world, within my linguistic capabilities. Just like my strategy for my videoessay on Getting Over It, only this time I had a better quality microphone at my disposal, and two folks who can pronounce three English words in a row without getting tongue-twisted like me: Allison, my writer colleague at Sixth Vowel, and her friend Laura. Rumpel and I were the voices in Spanish.

The recording was quick, I selected the audio clips and finished editing the very same day, and a short while later I had already uploaded the videos to Facebook and YouTube and they were ready for release.

The announcement day was the most exciting and demanding day in the project. Due to the strange way in which our reach works, most of the attention we got came from Facebook. About 100 people shared the video, we got something like 60 avatars and hundreds of comments, mainly from two Facebook groups: DUVAL (United Videogame Developers of Latin America) and Old Gamers.

Most comments in those spaces were negative, although there were many, many positive ones that I wouldn’t want to dismiss. I don’t know where that ratio comes from. It might be that most gamers are conservative—at least when it comes to gender issues—or that we reached Latin American countries where the debate on abortion hasn’t become popular enough, so pro-life sentiment prevails, or that people who stop to leave a comment are more prone to outrage. It might be all of these reasons and others I can’t even guess.

I have a lot of opinions on the main criticisms that we received, and I’ve no intent to keep them to myself, but they do deserve a separate space. Many of the more reactionary comments we got are not at all nice to read, but whoever has the stomach for that sort of thing and is interested in my reflexions about them, I more than welcome you to Annex I: Negative Response to Onda verde.

For the time being, here is a collection of the folks who supported us over at DUVAL and Old Gamers, some who simply expressed love for the project, and some who stopped to answer comments in our defense, saving me time and making me feel a little less lonely:

And the video in Spanish was shared around 280 times on Facebook at large, generally with tacit support and occasionally with encouraging messages:

Honestly, lots of curious and interesting anecdotes and reactions to the game happened during those days, but I’d rather save them for when I have more time or when a venue gives me space to talk about the project in more detail. (Even if there was no time for detail, I did get to talk about the game for an audience at the Bit Bang Fest Videojuegos’ indie dev roundtable. We were up on a stage and there was no table. There were chairs though.)

The day of release was very exciting, although obviously the tangible result is less controversial and thus generated less outrage, and it was shared and commented on less than the original announcement. The game’s site has about a thousand views currently, against 15k for the announcement according to Facebook’s stats.

Even if I didn’t get a lot of letsplays or reviews or interviews, the game was a resounding success in all the aspects I cared about, some of which are quantifiable and some that aren’t. I originally expected to get 15 avatars and 7 new likes on Facebook for Matajuegos. Both numbers ended up above 200.

The negative responses were within expectations, and surely a lot more tame than what women in my position have to put up with. Above all else, I leave this experiment with the affection and the art of so many people, and the conviction to keep making games about the things that matter.