Find the story, Granny Weatherwax always said. She believed that the world was full of story shapes. If you let them, they controlled you. But if you studied them, if you found out about them… you could use them, you could change them.

Coming Out Simulator 2014 (by Nicky Case) is a story within a story about the struggle of coming out to your parents. In this case, the author comes out as bisexual, but it applies to coming out as anything: atheist, trans, lefty, you name it.

The game unfolds as a series of dialogues in text message format. Your dialogue choices tend to convey a lie, a half-truth or the absolute truth. If you are a reasonable human being, you will probably sense the protagonist’s very real fear of coming out to their parents, who are abusive, and will be cautious about revealing the whole truth. 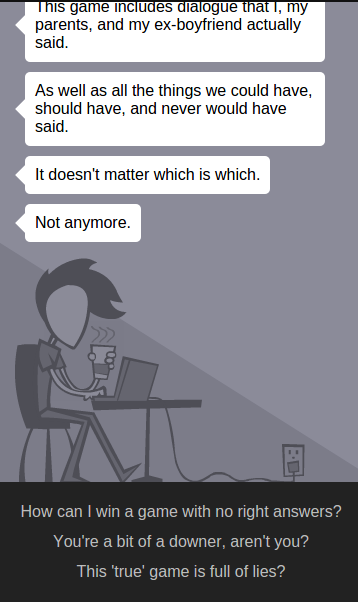 If you’re anything like me, and got dragged out of the closet by someone else, it’s possible that you will play the game as a power fantasy in which you scream, “YES THIS IS WHO I AM! WATCH ME SOAR!”, because neither you, nor the protagonist, nor I ever had any agency in how the news of our bisexuality reached those to whom we were trying to come out to. The protagonist’s mother read their texts, someone else told my parents. What’s the point in being civil if those we came out to already knew and had made their judgements?

The game always manages to stay funny, to make the right pun at the right time, and in doing so it eases the burden of our disastrous coming out. The burden isn’t yours or mine to bear alone anymore, now we get to share it with someone else and laugh, because it turns the parents in the story into cartoonish versions of what frightened us. They have no power over us!

This is a game that retells the same story in so many different ways, that by the time it’s done we have healed. We go along as the story is being rewritten until we find a version of it we can live with.

The game shows us very clearly that we often walk on a tightrope between being authentic to who we are and knowing in our gut that being truthful to someone else is dangerous. Choosing whether to come out or not is a constant process, and it isn’t over once you are out to your family.

Fortunately, it gets better, but it’s crushing to be the one living through the story while it unfolds, and sometimes that cathartic retelling takes too long to come.