We’ve all played a game that is simply too much fun to touch. A thing whooshes when you move it, two things wiggle as they push into each other, it all feels alive and reacts to the controls with glee. There might be many things that make the game good (or bad), but just interacting with it on a superficial level you already feel like a baby who can’t look away from the flashing lights of a toy, or the song it plays.

Some game designers call this “juice”. You can define it as “tons of cascading action and response for minimal user input”. A game can be juicy, and most games should be juicy, or so the saying goes. Another saying goes, “Game design is quite hard and it’s impossible to give broad statements that are true for everything, but adding juiciness to your game makes your game better 100% of the time”.

For me, juice is the sound of birds flapping their wings as they fly away from you in Alto’s Adventure (Snowman, 2015), it’s the uncomfortably pleasing sound of blue energy in Boson X (Mu and Heyo, 2014), the fluid transition between hanging someone from a chain and feeling really bad about it in Mark of the Ninja (Klei Entertainment, 2012), or the shattering of a window in Ronin (Tomasz Wacławek —ow I was talking about the 2014 demo but it looks like they released the whole thing in 2015!).

Games hit that neurological goldmine that makes us love both unexpected rewards and expected, but excessive, feedback. Generally speaking, juice is a way of making your players’ brains pump the good chemical without significantly changing gameplay. The way something sounds or animates can be cool as hell but it won’t change the rules governing the game system.

What would a game look like if it were juicy in a deeper sense? I’m thinking about games that are entirely about producing maximum output from minimal input: not in a merely audiovisual way but in their very rules, not in the way they present action but in the action itself.

The Fun and Good

A typically juicy game rewards core, repetitive actions so that you want to keep doing them. Does cool animations play when the hero moves in different ways? Let’s jump and duck and dash masterfully so they all play in rapid succession and look extra cool! Player input can be small or big, but big game output is guaranteed. When juice is embedded in the mechanics, however, things are bound to be a little different:

In games like One Button Bob and One Button Arthur (Ninjadoodle, 2010), minimal input is mandatory. There is only one way to do anything, like pressing the spacebar, and it makes our hero do different things depending on the challenge in front of them. Nano Ninja (Rogerio Penchel, 2010) works the same way. There is a great deal of grandiose output, all in response to the same simple thing. Is it level twelve? Then holding the key down will make King Arthur walk forward. Level nine? The key throws a boomerang or a shuriken. Level nineteen? Bob just walks forward and holding the key down makes him stop. Five? Holding it down means running up a wall all ninja-like.

Monsters and traps and pits and dragons come across your path and you beat them one by one, but all you’re ever doing is choosing when to press that spacebar and for how long. If you were to see the hands of a player going through these levels without looking at the game, it would make for a terribly dull experience. Mastering these games is like being fluent in telegraphed morse code. I imagine.

The Fun and Great

While One Button Bob et al. did a lot of things right, one thing they did not do was tickle that game designer bone telling you that your game system needs a world model — that is, a system for determining the player’s actions predictably and according to some internal logic, so that they can form a mental model of it. The player never gets a good sense of what the spacebar does. The truth is: it does many things, and you have no way of finding out what it’s going to do now unless you’ve already seen it, which usually means dying a few times. That first death at the hands of unexpected output will always feel unfair, and we don’t want unfair. Unfair is not a juicy feeling.

Burrito Bison, published in 2011 by the aptly-named Juicy Beast, is a game about a professional wrestler trying to escape from his candy-based kidnappers. It is also a one button game with a world model. When you press the One Button, you know exactly what’ll happen. Burrito Bison will propel downward using his belt rockets and hopefully hit something that keeps him bouncing toward freedom. There are exceptions in the form of quick time events, yes, but mostly you’ll be watching that simple input causing a simple, predictable main output.

Doing the same thing over and over and getting the same result is potentially a bad game experience though. Burrito Bison gets away with it by featuring tons of traditional juice. Gummy bears splash juicily, objects wiggle and go boom — even getting hurt sounds cool! On top of that, achievements and upgrades make sure to poke every corner of your brain in case you weren’t already addicted enough to the game.

By committing so strongly to both audiovisual and mechanical juice, it remains one of the most fun and most effortless interactive experiences I can recall. Right after Burrito Bison Revenge (Juicy Beast, 2012).

The Boring and Even Better

A thing I like is that “maximum output from minimum input” has a lot of possible interpretations.

Best Chess (Pippin Barr, 2015) is, in theory, just regular chess against an AI opponent. The AI, however, is supposed to be the absolute best at chess. The moment you make your move, it’ll start going through all possible moves from that point on in order to determine the optimal countermove. It’s easy to think of this output as a kind of maximum, since the number of probabilities it needs to catalogue is immense. You get to see a simple text describing the potential moves the game is analyzing, but the truth is no computer will survive the millions of years it would take for the calculation to complete, so the chances of a second turn are slim. In practice, your first move is the only one you’ll ever take. This is a new level of minimal input. Not only do you get to do just one kind of thing, you only get to do it once.

Pippin Barr is particularly prolific in the field of small, mechanically juicy games, if we can even call them that at this point. Don’t Drown (2014) has a single level where your only possible action is keep floating. The output isn’t maximum really, except maybe in the sense that it’s absolutely everything the game has to show you. The levels in A Series of Gunshots (2015) are silent, dark scenes that you can interrupt at any point by just pressing a key and making a gun fire. You never see the people or the guns involved, but you get a sense that the game is trying to say something about real gun violence; every scene is brimming with tension. What you make happen by pressing that button is perhaps not a lot, but it’s much more than you’d initially suspect. Execution (Jesse Venbrux, 2008) is also a game about guns. Like A Series of Gunshots, it won’t make shooting look fun. As in Best Chess, you’ll probably only do one kind of thing, once. The results are even bigger than in Best Chess, because it’s not a game about millions of years. It’s a game about forever, in the form of a decision about a character’s execution that the work refuses to undo so you can change it, even if you reset the game.

If there is still one combination that remains to be explored now, it’s the most extreme one. What about a game that unravels in its entirety after you do one type of thing, once? What if this unraveling involves a multitude of elements working as a vibrant, visually stimulating, auditorily pleasing and excessive response to a simple action?

Room of 1000 Snakes (Arcane Kids, 2014) is essentially that. It’s one of my favorite games of all time and I would gladly blab about the many things it does, but in this context I can’t help but read it as a commentary on juice, and on our thirst for “bountiful user feedback”.

While its input system is as complex as most small 3D indie games (six movement keys and mouse), it spans exactly one level — a level that is essentially a single-key interface built into the game for your avatar to handle. 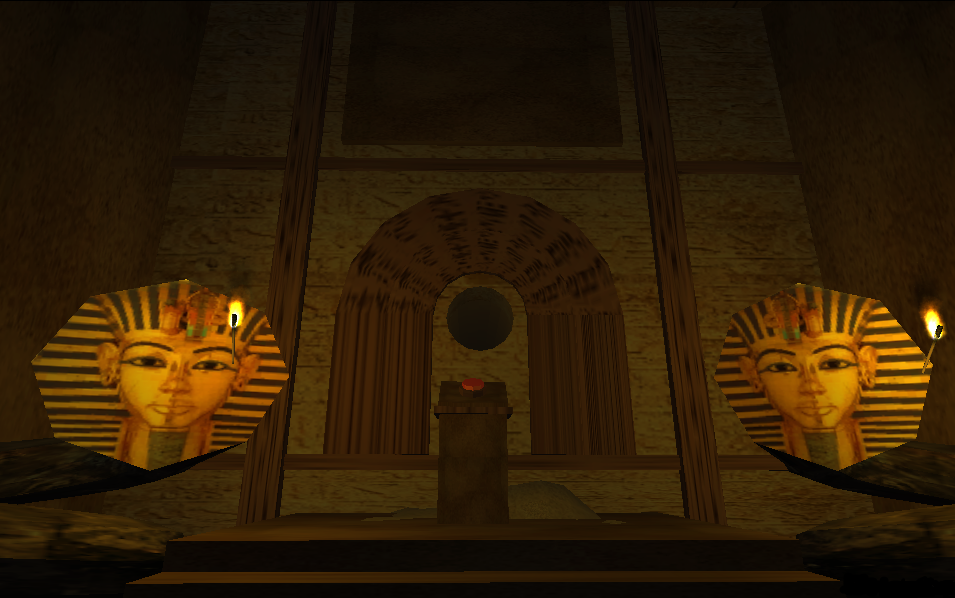 Once interacted with, the titular snakes reveal themselves in what may or may not be a clear articulation of “the Mystery of the Snakes” that is mentioned during the intro sequence. A riff of catchy strings starts to play all around you and a man sings about the world. Your vision is quickly cluttered with the obscene amount of output the game tells you is all yours if you want it so bad. The feeling is one of revelation, of an unraveling of all things. A small minigame appears that changes absolutely nothing and then the game ends.

The unquestioned cause for juicing everything up could benefit from some criticism. Not direct opposition perhaps, but we shouldn’t get to exploit evolutionary conditioning to make our work “addictive” without first feeling a little bad about it — not if I can help it. In Room of 1000 Snakes, you touched something once and everything happened because of it. Minimum input and maximum output on steroids. Implementing the extreme of something is, after all, an indispensable part of critiquing it.

“Maximum output from minimum input” is a boring formula. This makes a lot of sense, in a paradoxical sort of way inherent to the world of videogames, because boring is predictable and you want to be able to predictably produce fun. One of my deepest secrets, though, is that I don’t like fun games that much. What I like is finding out how many twisted ways there are for misinterpreting the juice formula and experimenting with it in new, interesting ways; Even if it means the end result will be boring, even if it means I get bitten in the process.

1 thought on “Minimal input games and the exploration of juice”