We Know the Devil is a Visual Novel (VN) created by Aevee Bee, Mia Schwartz, Alec Lambert and Lulu Blue, published by Date Nighto in 2016. It tells the story of Jupiter, Venus and Neptune, three queer teenagers on their last week at a religious summer camp. Before they can leave, the coach tells them it’s their turn to spend the night in the cabin inhabited by the Devil.

The game’s dialogues hint that the characters live in a sinister Magical Girl universe akin to the one from Puella Magi Madoka Magica, where crystals are used to talk on the radio with God, to spot the Devil and to transform into super heroes. Our main characters aren’t allowed to have a transformation sequence because resources shouldn’t be wasted on those who go to the camp. It’s also hinted at that everyone inside the camp must face the Devil sometime during their stay. If we strip the narrative of its magical elements, we find an experience very similar to the one I had with my friends in Catholic high school. 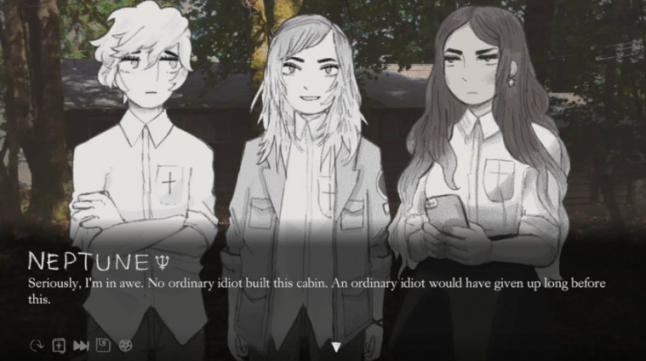 Deep down, We Know the Devil is about the internal struggle of teenagers who know their identity is at odds with the customs and expectations of their environment, who know in their gut that those customs are bullshit, but who still try to fit in out of fear that they’ll reveal themselves as the Other despised by their community and suffer their retaliation.

As a queer person, the biggest problem I had being raised in a house which upheld Catholic values, was that I was bombarded from all sides with the message that being me was wrong.I knew that I couldn’t change who I was, so for as long as I shared the same roof with people who stuck to that belief system as if they were Carrie’s mom, I made the sacrifice to cover up part of my identity in order to avoid social ostracism and parental anger. 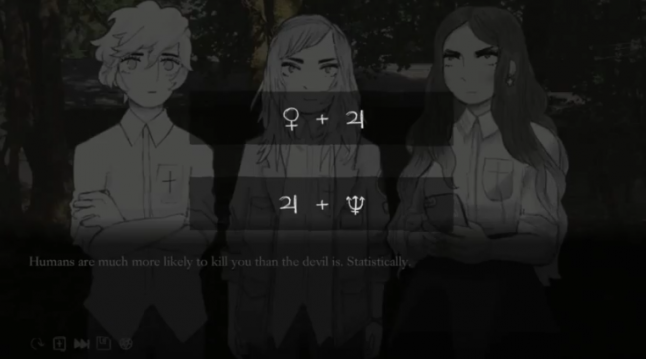 Although I solved my issues by switching to an environment that accepts me for who I am, the protagonists of We Know the Devil don’t have that luxury. We know that even if they escape the camp’s oppression, they will still be subdued to society’s pressures. As players we don’t have the tools to help them escape, but we can choose who keeps each other company during several moments of the night. The issue is that if someone is left alone longer than the rest, she will be possessed by the Devil.

The peculiar thing about demonic possession in  We Know the Devil is that those possessed become a physical reflection of their deepest desires: desires such as being able to overcome the parental directive against holding and touching other people, against performing the gender they’re comfortable with or no longer being sick. Alas, everything related to the Devil is considered taboo and these expressions are his work, so the friends of the possessed girl use their Magical Girl elemental powers (without a transformation sequence) to fight against her and put an end to all these feelings and desires. We never know what happens with the possessed person after being defeated and repressed in such way, but her friends tell us that she learned something about herself. 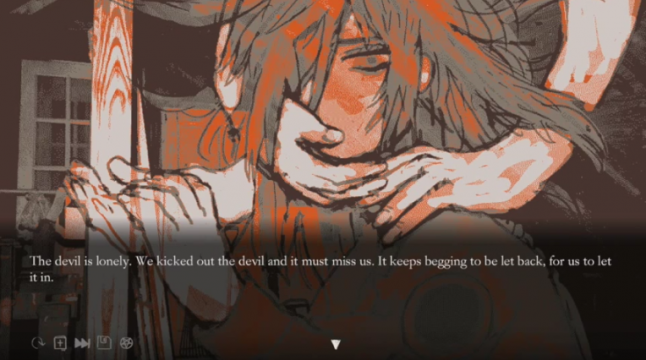 The endings that reveal the secrets, wishes and needs of the characters and portray more accurately the oppression of being a student in a religious school with an outdated belief system are those in which someone is left out: because the possessed is forced to confess their desires and change into something different. Despite this, if the player manages to stop everyone from being left out, she can earn an ending in which all the friends manage to follow their desires without shame and they manage to convince the rest of the camp to do the same.

When played progressively, from bad to happy endings, We Know the Devil leaves us with the message that the best way to escape oppression is to know and accept yourself as you are. It’s something that I learned on my own as an adult, but I would have liked to have known it as I grew up.