The world of videogames moves at a very quick pace and we have a tendency to forget about some of the most interesting titles we’ve had the pleasure of coming across. A recent conversation reminded me of a truly notable title: Don’t Look Back. As some of you will already know, it’s the title of the game Don’t Look Back by Terry Cavanagh, published in 2009.

What could be so interesting about the title of this game? After all, it’s only three common words and their meaning is clear — it’d be more worthwhile to reflect on the game’s virtues. But no, today I’m more interested in its name, and more particularly in the semantic mutations it’s subject to throughout the game.

It begins as any other title. It permits itself the luxury of tricking us in that way. It appears in big letters over a series of options, floating over the image of a pixelated man contemplating a tombstone beneath the rain, and it disappears without a fuss when we decide to start the game and the man moves to the right, descending through caves and cliffs. 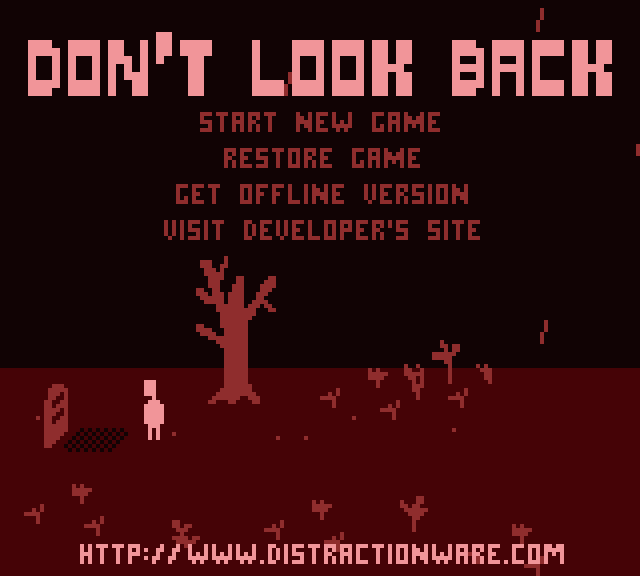 The game quickly becomes challenging. We die often at the hands of violent animals, hostile environments, and all kinds of demons, but the game provides us with a suggestion: don’t look back. Our deaths don’t push us back more than a couple of screens, and the only tactic available to us it to insist on moving forward.

This is the game title’s first of several sleights of hand (and the least impressive): those three little words, without even showing themselves again, just through virtue of their permanence in our memory as we play, go from being a mere identifying phrase to being strategic words of advice. Don’t look back is the perseverance that the game promises to reward.

Gradually, the caves become a sort of underworld, but we don’t allow that to stop us; we continue on. After what seems to be a final showdown we are greeted by an allusion to a well-known finale: we rescue a damsel in distress. The damsel, however, turns out to be a ghost, and this apocryphal climax in reality marks the completion of only half of the game.

We embark leftwards on the long journey back, climbing ropes to get out of the various pits we’d jumped in. The ghost follows us closely. She’s as anxious, it would seem, as we are to save her from the underworld.

A new rule is added to this portion of the game: we can move left or stand still, but if we so much as take a single step to the right, the ghost disintegrates and we start the screen over again, just as if we had died. This marks the second metamorphosis of the tile: don’t look back, because you’ll lose your beloved one forever.

The phrase, which before was strategic advice, has now hardened into one of the game system’s concrete rules. Yet as it hardens, becoming as strict an instruction as “press X to shoot,” it also softens by evoking the myth of Orpheus and Eurydice.

Taking on the form of a literary reference, the title reminds us that tales and legends also create worlds that function and behave according to certain rules. Videogames, for all their novelty, are just one of the latest versions of this ancient custom.

Challenges rain down upon us once again. Many of them try to seduce us with screens that would be trivial to resolve with just a few steps to the right, but we must resist the temptation. We learn to take the complicated routes, we overcome obstacles, and we return once more to the world of the living and to the game’s starting point: the tombstone beneath the rain.

We now witness the final scene of the game. Instead of finding the gravestone abandoned, as he had left it, our hero comes upon himself contemplating it in silence. The hero and ghost dissipate, leaving behind only the pixelated man, in the same position he was in before the game started.

While we accepted the cavernous adventure and the excursion beyond the veil, the ending suggests a realistic interpretation of events: the man never moved from the tomb’s side, and everything we went through was a fantasy in which he recovered his dearly departed. The adventure lasted however long it had to last, but it was bound to crash and burn against reality sooner or later

Everything we did – did any of it matter? Is the game about the futility of human actions then? How does one face the loss of a loved one without our whole universe crumbling upon itself? The game returns to its initial state and draws us a possible answer: don’t look back, the people that’ve left won’t return and it’s far too easy to become trapped in the past.

This is the third and last metamorphosis of the title.

A common phrase becomes strategic advice and then a rule and then a mythological reference and finally a life lesson. Whether the lesson is good or bad is a another matter altogether, but the title has certainly demonstrated its versatility.

More than six years after its publication I visit the websites where I first found the game and I read the first titles that catch my eye with malicious intent. I pay particular attention to the number of things I imagine the titles could mean throughout the course of their respective games: Alien Transporter, Astral Crashers, Battle Pirates, Clicker Heroes, Dawn of the Dragons, Time Chasers, The King of Towers, Sheep Farm, Teleport Gun, Cosmic Raiders, Endless Expansion, Jumpy Monsters, Ninja Diamond Adventure.

Don’t Look Back demonstrates that videogame titles are capable of exercising an elasticity that is very seldom taken advantage of.