The game’s structure is that of the gradual rise to power, the most widely used structure in games both old and new: a male and somewhat pale individual starts off in the world with nothing to his name and accumulates power-ups until he’s become a superior… something.

Corporate Climber, however, lays some twists and winks over that structure, and recontextualizes it in several places.

The first and most visible wink and nod is the scenario itself. The game takes place inside a building, the HQ of some generic company whose name and function is unknown. It doesn’t invite us to work out our muscles, but to get better paying jobs and advance our career.

Each level is a new floor of the building and a new job position. Beating the level, getting a promotion, taking the elevator to the next floor: within the context of the game it’s all the same thing.

Winning is literally “getting to the top.” As per a certain narrative tradition, story progression corresponds to the traversal of a linear space, a kind of vertical Snowpiercer, the saving grace being that Corporate Climber never takes itself too seriously.

On every floor, our jobs and tasks consist of physical challenges framed within the mechanical conventions of platforming games. Here thrives an interesting comedic tension: as the game progresses, the tasks become increasingly intellectual in nature, and the physicality of their ludic representations is a constant source of extravagance.

Whereas the early levels hurl strong physical risk at us in the form of sewers and boilers and relentless packaging machines, the later ones make up deadly risks out of the tasks of Financial Directors and CEOs.

Another clever trick is the level preview: the current floor – the game’s active area – is a horizontal strip spanning the central third of the screen, so that below it you can always see the previous level, and above it, the next one.

Our young entrepreneur works hard with his next job in sight, the constant promise of the coming promotion just one floor away.

Most of the time this isn’t more than a conceptual or aesthetic detail. Every so often, however, the game offers small vignettes of interaction between the different strata of the company. For example:

There’s a recurring theme through all these vignettes: violence exercised from top to bottom. The economic rise of our character is, in no subtle terms, a moral decline.

Corporate Climber doesn’t aspire to the fine critique of a treatise on economics. It’s not Gramsci or Althusser. But it’s also not content with simply reproducing the evils it comments upon.

Our young entrepreneur’s diabolic ascent comes to an end with a higher form of top-to-bottom violence: having reached the last floor of the building (with a clear view of a rooftop billboard with the company’s name on it), cornered by the law, our Chairman of the Board is violently thrown out of a window and has an unfortunate encounter with the pavement.

We wake up in a kind of infernal antechambre, naked.

To the left, coins and banknotes mark a path towards the door of an elevator. Taking the elevator sends us back to the fifth sub-basement — that is, to the game’s first level — where we start the game again from scratch. An endless loop is suggested.

Theoretically, our character could make it to the top, die for his sins, and for his sins be reborn at the bottom of the food chain, over and over and over again. Is the game telling us about the cyclical refinement of the human soul or about the relentless cycle of labor exploitation?

Perhaps the answers can be found in the part of the building that still remains to be explored.

Back at the infernal antechambre, the “sixth sub-basement”, we see that there’s another door to the right, filled with fire. Many games have these “limbo screens” with doors on both sides, one to continue playing and the other to quit the application. But Corporate Climber is a browser game, you don’t need a quit option.

We venture into the fire door. The flames consume us and then go out, as if they’d received exactly the sacrifice they needed. Here begins a new physical decline. This time a voluntary one. 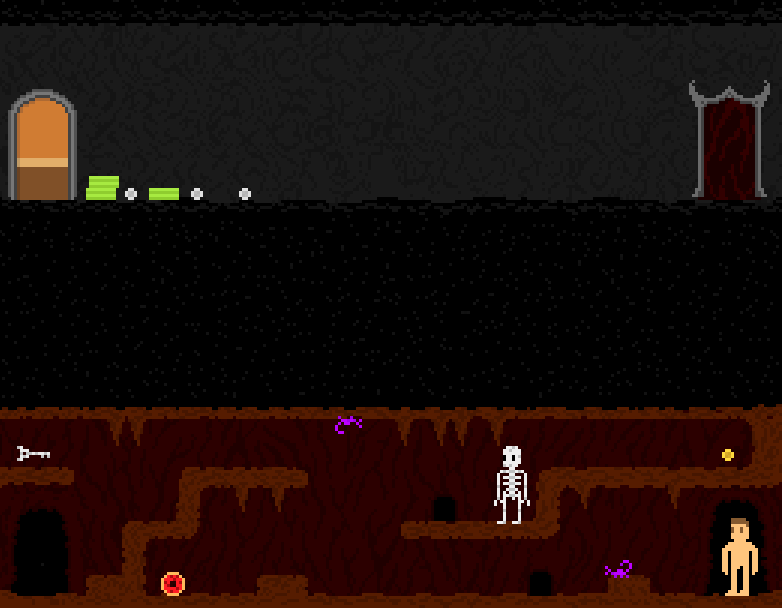 Full disclosure: On the occasion of his birthday, I once gave the game’s lead programmer a stuffed Luigi doll.